The Top priority of the North End 5 Year Community Plan is Youth! 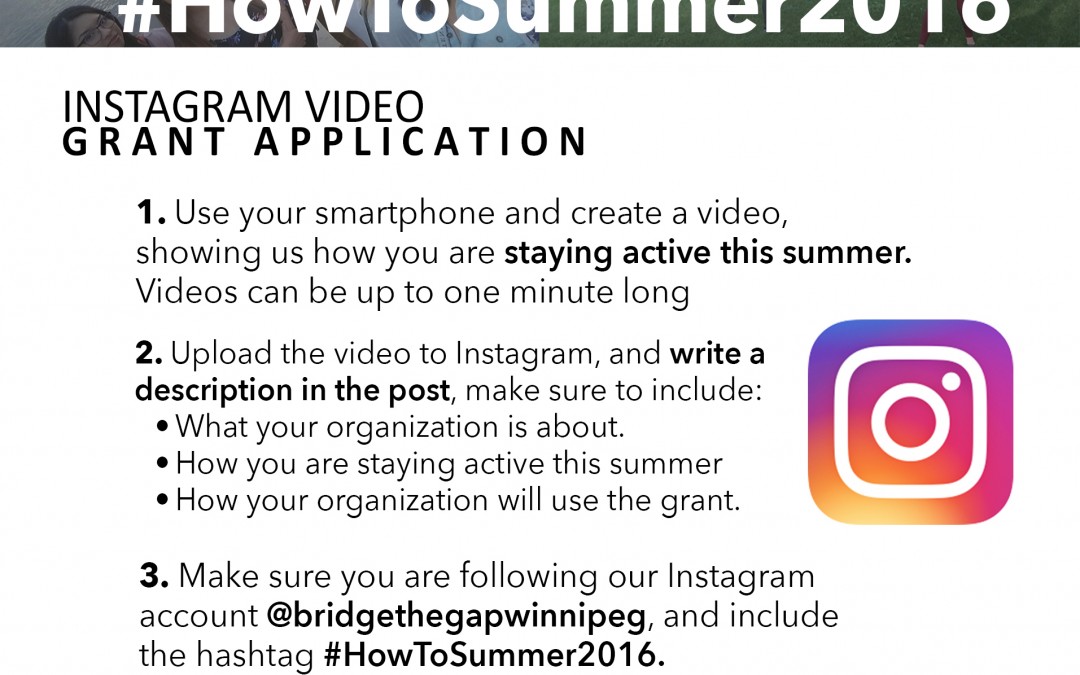 We at Bridge the Gap Winnipeg, along with the North End Community Renewal Corporation, are teaming up to reward a $2000 grant to a deserving North End organization for young people. The application process is simple. Use your smartphone to create and upload a “short video” application through Instagram called: “#How To Summer 2016”. http://www.bridgethegapwinnipeg.ca/  ... END_OF_DOCUMENT_TOKEN_TO_BE_REPLACED

The North End Community Renewal Corporation (NECRC) operates under gudiance of its community members, resident associations, local businesses, faith based and cultural organizations. These partners have an eqaul opportunity to provide their opinions on needs in the North End which is then compiled into a report. This report, the 5 Year North End Community Plan, is set to expire, with the new report guiding NECRC from 2016-2021. We (Youth) were identified as the number one priority of the North End in the previous 2011-2016 report, and such want to encourage you all to support the youth of the North End for the upcoming period. To further enhance youth participation in this process, the North End Youth Council is holding an event at the Indian & Metis Friendship Centre (45 Robinson Street) on Tuesday November 24th from 4:30-7pm (doors open at 4pm)  to celebrate, and also to receive feedback from the community.  This event will be hosted by Jenna Liiciious, with guest performers Prairie Grass Drum, William Prince and Nealon Almario. As a special gift to those who attend, the first 100 youth to sign-up and complete the survey process will receive $5.  There will be a light dinner served and childcare provided.  While this event is catered towards youth from 15-24, all ages are welcome and encouraged to attend.  Please note that the $5 honorarium will only be provided to youth. If you are unable to attend, you can fill out the survey on the NECRC website.     You can also download your own copy of the 11″x17″ poster here.... END_OF_DOCUMENT_TOKEN_TO_BE_REPLACED
« Older Entries
Next Entries »

A strong, proud, and supported collective youth voice in the North End

The North End Youth Council is committed to providing opportunities for meaningful engagement, that give young people a chance to raise their voice and inform the broader community of what they see as most important—now & in the future

Northendyouth.ca is a central website for youth to find what is happening in the NE so that we can keep our youth motivated and informed. There are 5 Main Categories of NorthEndYouth.ca. They provide a wide range of information, links and assistance with many issues in the North End. The categories   are; Careers & Learning, Health Family & Safety, North End Youth Council, Sports & recreation and Neighbourhood Places.

Food Matters’ Manitoba’s Our Food Our Health Our Culture Program (in partnership with North End Food Security Network) faciliaties cooking classes and food skills programs for youth at partnering agencies (Winnipeg Boys & Girls Clubs, Ralph Brown Community Centre, Turtle Island Neighbourhood Centre, and Wayfinders Manitoba). All programs are focused on teaching youth cooking and life skills, health and nutrition, and working with traditional foods as a way to connect youth to their our own culture and those of their friends and neighbours.

For more information: call Lissie at 204 927-2346 or visit www.foodmattersmanitoba.ca

North End Rec Plan Implementation of North End Rec plan has continued with focus on several major initiatives in the Point Douglas area. The North End Hockey Program is off to another successful season, boasting 150 active and participating youth on nine different teams. 2015 will see the implementation of a few new facilities in the process of development; there are three major projects either in early to mid-development or planning, these include: Machray Park redevelopment planned for 2015, Powers Park redevelopment planned for 2015 and a proposed BMX Park still in planning.

21 Block Inventory Following the completion of last year’s 21 Block Area Recreation Inventory Report, the LiveSafe Recreation Facilitator is now in the ‘Next Steps’ phase, following up on the concerns outlined in the report: cost, transportation, safety and communication/visibility. He is working with local resident to address these concerns by developing “Made in the North End solutions through attending community and resident association meetings. To date, he has met with Dufferin and St John RA’s as well as Aboriginal Visioning for the North End’s Volunteer Leadership Team.

North End Recreation and Leisure Fund The LiveSafe Recreation committee is now in the process of creating a small grant to be administered to the 11 Point Douglas communities. The purpose of the grant is to provide small amounts of funds to help facilitate and initiate recreation opportunities for North End residents. Total amount of the fund is $5,000.

For more information please call Andrew at 204 396-5954 or email andrew@necrc.org